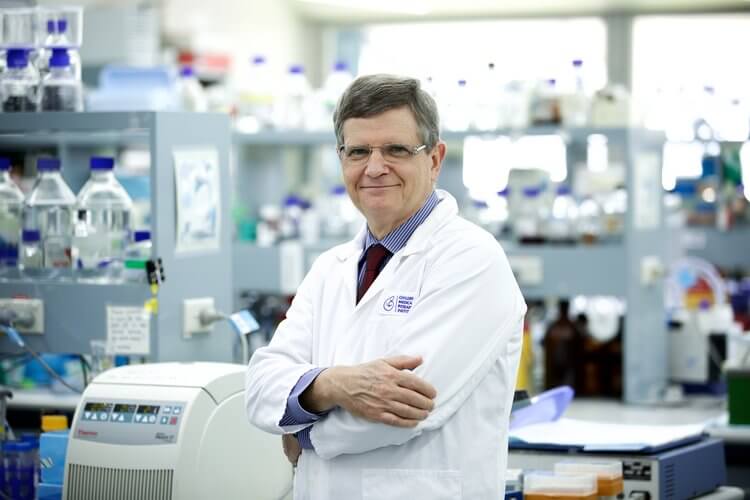 10 years ago Arinex founder and chair Roslyn McLeod OAM, in her capacity as President of the Rotary Club of Sydney (RCS), chose to support the Children’s Medical Research Institute (CMRI), helping to raise $170,000.

Today, Roslyn and the rest of Arinex celebrates after Director and Head of CMRI’s Cancer Research, Professor Roger Reddel was named in the top 2% of globally cited researchers in the Clarivate Highly Cited Researchers 2020 list.

“We were very generously supported by the Rotary Club… primarily for our cancer and gene therapy programs and it was done in a way that allowed us to use it very flexibly to turbo charge a wide range of promising projects,” Professor Reddel said.

“We channeled funds to areas that needed them the most and both those areas have exceeded those expectations over the last decade.”

CMRI was selected by Roslyn in 2010 as the recipient of the club’s President’s Project, which meant all money raised went directly to CMRI’s Cancer Research and Gene Therapy Units.

Some of the CMRI research breakthroughs have since been:
• Professor Tracy Bryan’s Cell Biology Unit found a new way in which an enzyme (called telomerase) acts to keep cancer cells multiplying. This could provide a faster way to stop cancer cells in their tracks

• Dr Pragathi Masamsetti’s work revealed how and why certain cancers are able to outfox current chemotherapy drugs, which will help in future to better tailor chemotherapy use and develop new, improved cancer treatments

• Associate Professor Tony Cesare’s team worked with the Crick Institute in London, UK and Harvard University in Boston, USA to solve a key puzzle about dividing cells with important implications for cancer, aging, and an inherited childhood genetic disease

• Professor Patrick Tam’s research in collaboration with the Chinese Academy of Science in Shanghai has revealed a ‘developmental map’ of the embryo with instructions on how early stem cells are guided to become specific cell types throughout the body. This informs our understanding of how birth defects and genetic diseases develop and the ability to treat these conditions.

As well as Roslyn’s service as past President, Arinex has been a long-standing supporter of Rotary Club of Sydney, offering pro bono event management services to help manage its annual NSW Police Officer Awards.

Watch the full interview between Roslyn and Dr Reddel on his recent citation and what his team’s research has led to.