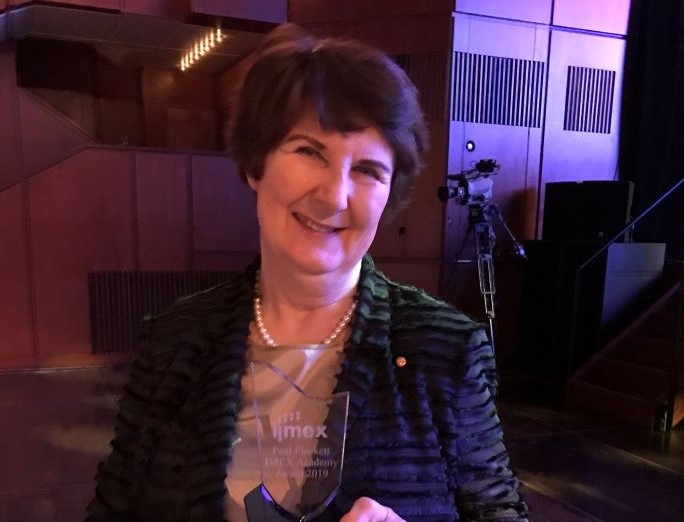 This international award, for persons who have made “outstanding contributions” to the meetings industry, was announced during the Gala Dinner at IMEX in Frankfurt, attended by industry professionals from around the globe.

The award follows Roslyn’s recognition as a top 10 Inspirational Women by ICCA in November 2018.  For over 20 years Roslyn has imparted her knowledge and ideas at sessions and seminars for IAPCO, ICCA and INCON in Europe, Asia and the Americas. As well as her knowledge sharing, she has contributed to boards for ICCA, IAPCO, INCON, Meetings & Events Australia and others, providing leadership skills to effectively drive change and benefits for the Business Events industry.

Roslyn, who is in her 50th year in this industry, said she takes pride in her strong and long-standing team at Arinex and in particular Executive Manager – Lorraine Di Vito, Chief Operating Officer – Nicole Walker and National Conference Manager – Melissa Murphy, who led the internationally-acclaimed 19th International Microscopy Congress in 2018.

Speaking of her win overnight, Roslyn said: “I am humbled to be recognised among fellow global industry colleagues and friends whom I admire and respect immensely. Thank you to IMEX for continuing to provide such a quality platform in which to bring together world leaders in the events industry and thanks to our INCON Partnership who as true leaders generously collaborate and share.  I pay tribute to Angelo, my husband, and David and Alison our children for their love and understanding when I was missing in action and for being a wonderful supportive family.”

Carina Bauer, IMEX Group CEO, added: “Massive congratulations to our award winners – their pioneering efforts are truly making waves in our industry. These awards go from strength to strength but only because of the continuing efforts of our attendees tonight and the business events community as a whole.”

The IMEX Academy Award comes after Roslyn was named an official advocate for the International Convention Centre Sydney (ICC Sydney). Geoff Donaghy, CEO of ICC Sydney, said: “I have had the great pleasure of knowing and being a friend of Roslyn’s for close to thirty years through a number of roles and positions. She is held in the highest possible regard in the industry, which is something I also share personally. We are delighted for Roslyn to be a part of our ICC Sydney advocates club.”

Arinex has been exhibiting at IMEX in conjunction with Tourism Australia, INCON and Body and Soul Destination Management Representation.