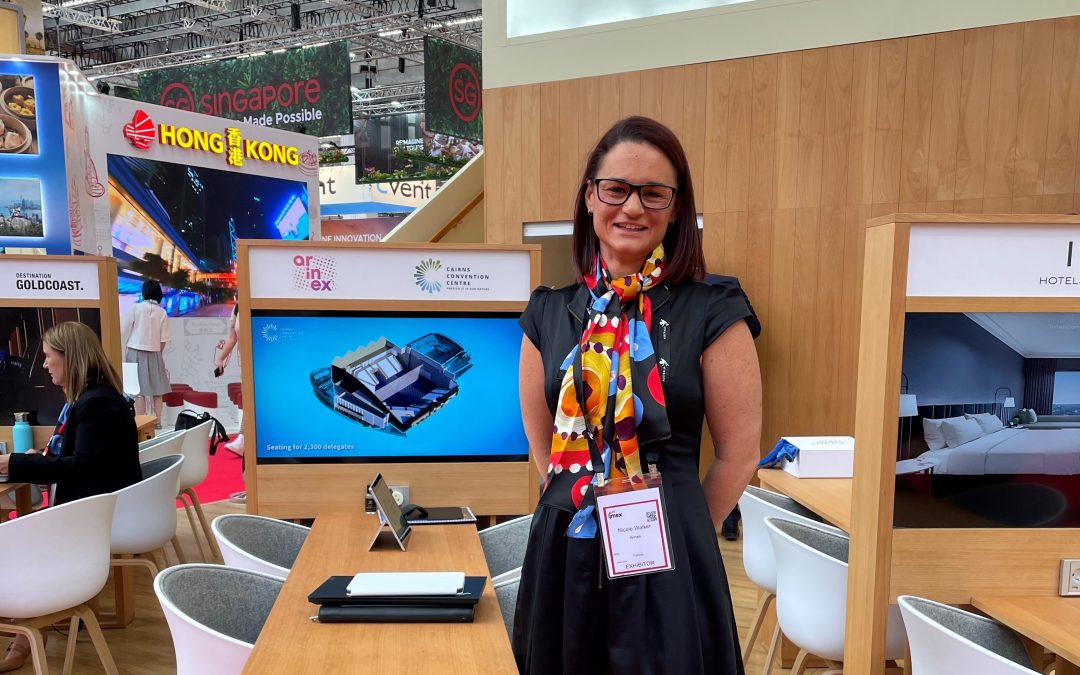 If anyone needs more evidence that business events are ready for action again, look no further than IMEX Frankfurt 2022. Returning to the global stage for the first time since 2019, the show was a place to reunite with friends and colleagues, celebrate the industry’s resilience, and secure major business deals.

Arinex had five team members on the ground across the three-day event, including Managing Director, Nicole Walker (who was a representative on the Tourism Australia stand), and Senior Business Development Manager – International, Virginia Loyola.

We got the download on their travelling experience and what IMEX had to offer.

It is certainly not smooth sailing yet. While Australia is dealing with its own staff shortages and supply chain issues, Europe’s airports and airlines are facing challenges on an exponential scale.

Virginia travelled from Sydney to London before arriving in Frankfurt for IMEX, and like many attendees, spent a lot of time waiting in long queues that were the result of people travelling for overdue holidays, flight cancellations and overbooked flights. Some flights even had no catering due to staff shortages.

By all accounts, IMEX Frankfurt was very much a reunion as well as a place to do business. Nicole felt ‘a genuine buzz in the air as people were reconnected’, in some cases for the first time since the last IMEX Frankfurt in 2019.

“There were plenty of hugs all-round while also respecting people’s preferences around physical distancing and mask wearing,” she said.

Virginia agreed: “there was lots of energy, lots of smiles and lots of hugging. It was busy on the stands and people seemed very happy to be there.”

Business events have had a difficult couple of years, but IMEX proved that the industry is resilient and positive about the future.

Nicole noted that while there weren’t as many hosted buyers as previous years, all 25 of her meetings on the Tourism Australia stand were informative, detailed and resulted in key leads and quotes.

“The sentiment towards Australia shifted noticeably between IBTM Barcelona in November 2021 and IMEX Frankfurt in June 2022,” Nicole said. “I was no longer asked about border restrictions, lockdowns and capacities. Instead, buyers wanted updates on developments since pre-COVID, staffing and service levels, and interesting new concepts and experiences for their clients.”

Virginia added: “There is a longer-term interest in Australia, especially around major events such as the 2027 Rugby World Cup and 2032 Olympic Games.”

Many of the presentations at IMEX focused on how the pandemic has changed the industry and offered insight into future trends.

“There is a strong expectation that shorter sales cycles will continue,” said Virginia. “Sustainability was also a focus and it was encouraging to hear it is becoming a higher priority for both event organisers and delegates.”

Of the many areas discussed, Alessandra weighed in on the importance of education and training of both new and existing employees – considering new skills needed post-pandemic.

When it comes to competing with high-paying industries such as tech for skilled candidates, Alessandra said it was important to focus on the benefits of the events industry such as personal connection, making a difference, running events onsite, travel and leaving lasting legacies in communities.

IMEX Frankfurt wrapped up just a few days before World Environment Day on 5 June, and sustainability was a focus at the tradeshow.

Before attendees arrived, they were urged to take the IMEX People and Planet Pledge, which included a series of commitments for buyers and exhibitors to choose from to champion social and environmental responsibility. Attendees were urged to travel in the most sustainable way, carbon offset, choose hotels within walking distance and bring reusable water bottles and keep cups.

At the tradeshow, Virginia visited the IMEX-EIC People & Planet Village which highlighted all the ways in which IMEX was working to reduce its environmental impact and support the community.

There were also ways for exhibitors to donate leftover food, furniture and plants for those in need locally.

MeetGreen was engaged to benchmark IMEX’ performance against industry standards including the UN Sustainable Development Goals.

“While IMEX Frankfurt is not yet a carbon neutral tradeshow, it was encouraging to hear organisers are working their way to net zero through a commitment to the Net Zero Carbon Events Initiative,” Nicole said.