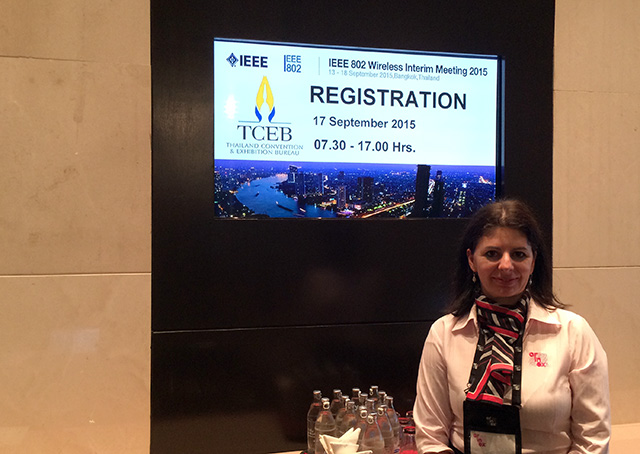 The IEEE 802 Interim Meeting is held 3 times per year with two of the meetings being held in North America and the third meeting being held in an international location, alternating between Europe and the Asia/Pacific.  Arinex has managed the international Interim Meeting since 2001.  For 2015 Bangkok, Thailand was chosen as the destination and the Centara Grand & Convention Centre as the venue.  The meeting typically comprises of 300-350 attendees from 21 countries attending 14 concurrent sessions across 5 days.

The Bangkok explosions in August 2015 occurred only 3 weeks prior to start of the IEEE 802 Meeting and were only 500 metres from the Meeting Venue. There were several concerns regarding the impact of these bombings on the meeting, namely

Arinex and the Organising Committee consulted with the IEEE Standards Association and IEEE Legal in NYC and the decision was made to proceed with the meeting.   Information bulletins were updated to the website and sent to all attendees updating them on travel advice from the International SOS of which IEEE is a member, and issued statements from Thailand Convention & Exhibition Bureau (TCEB) on the situation, informing attendees of what was happening and travel was advised with caution.  Arinex also worked with the TCEB and the Centara Grand & Convention Centre to ensure the meeting costs were contained to prepare for any potential loss in revenue due to cancellations.  The Centara staff members were proactive in all aspects of the planning to ensure the meeting was a success and the attendees’ experience at the meeting was outstanding.

Only 4 attendees cancelled due to the Bangkok Bombings but an additional 20 registrations were received after the bombings and onsite.  The meeting was a great success and from a projected loss made a small surplus for IEEE 802 due to the continued communication with the attendees, a collabrative working relationship with the TCEB and the Centara Convention Centre.

“As the head of the OC, I can honestly say that incidents like this are a planners worst nightmare. In the end, however, we had an outstanding meeting thanks in large part to the very professional efforts of arinex and the IEEE Standards Association in maintaining a calm environment and structuring the right level of communication enabling the delegates to make an informed personal decision on whether to attend.”